Adding a conservatory to your home may seem like a big decision, but if you make a well informed choice, it can be a relatively inexpensive way to change the dynamic of your whole house and add significant value.

The History of Conservatories
Conservatories were traditionally used to grown plants, and their second name of ‘sun room’ is a good example of the fact they are usually warm rooms capturing sunlight where you can overlook a view, such as of a garden or surrounding area. In the UK a conservatory is defined as a building or room with at least 50% of walls and 75% of roof glazed – either made of glass or translucent plastic or polyester. They became traditional in the Victorian era, but really took off as additions to houses in the 1960s and 70s as insulated glass was created. Today, conservatories offer a relaxing alternative to a porch, which protects against British weather but allows you a room exposed to the elements. 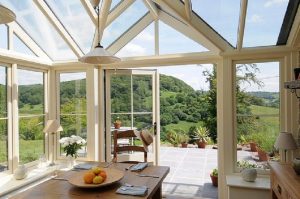 Uses for Conservatories
Conservatories can make a relaxing living room area, or an exciting playroom for kids, as their exposure to the views of the outdoor world will inspire you while still at home. They also can be a great addition to a kitchen/dining room, and an impressive place to entertain guests. Adding a conservatory to your home is a simple, and cheap way to change the dynamic of certain rooms or areas of the house.

Getting a Conservatory
Adding a conservatory to your already existing house is easier than one might think. The structure itself can be bought from a conservatory company, who will often offer services adding it to your home. There are a number of companies in the UK who provide conservatory quotes around the country. Most companies consider various factors in their quotes. Some companies, for instance, are based on a consultation, but other companies may just offer a quote based on the different sizes and styles of conservatory available.

Once you have chosen your style of conservatory, you need to plan how to attach it to your house. While in many cases the conservatories can be attached by the homeowner, by preparing the base of the room the conservatory will surround and following instructions, it can be easier to hire a builder. The process is unobtrusive, however, and your conservatory can be up in as little as a day. Depending on the size of your conservatory there is a chance you may need to apply for planning permission but this is unlikely.

Would you ever add a conservatory to your home? Do they seem like a good idea or too much hassle?